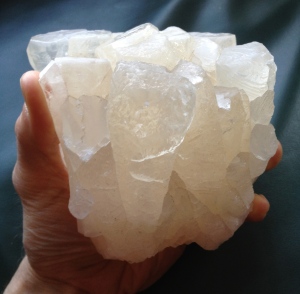 I was gonna name this Blog: “Are Crystals Godly?” and I know plenty of people I’m connected with (like on Facebook) who’d say “of course!” As mineral wonders of great beauty and energy (especially for those who go in for that sort of thing), how could you NOT think so?!

In fact, many of us would say crystals are hyper-Godly, being particularly representative of the divine.  They were formed without human intervention. They represent the creative and magnificently structured capabilities of nature (ie. the order of the universe). And they will endure – forever – so long as there is an earth (unless they’re ferried off the planet during its final stages).

It’s interesting to note that without interference (unlike with biological forms), crystals remain unchanged, without any particular need for maintenance or special care (unlike paintings). They do represent the Eternal, constancy, and equilibrium through change…what’s “on the other side” of our mutable experience…a bit like Nirvana.

But I was inspired to write this blog more based on a comment that I got to my Facebook post of personal pieces I’ve displayed at the Expos recently (see picture here, to the right).

One person says “Drool,” another says “Beautiful,” and still another says “Very nice collection.” My eyes stopped on reading the following: “Sad.healing is not in rocks.But only through the blood of Jesus” (verbatim).

My first reaction was to delete – or delete and ban – but something made me keep it, to contemplate. That first, defensive reaction was to say “we don’t need people raining on our parade here: it’s hard enough living in a skeptical, horrible world…without party poopers trying to invalidate what comforts we stumble upon.”

I let a few days pass, and then actually Replied: “I guess that means healing doesn’t come through human compassion, medical intervention, healthy living, or any other, of the other wonderful tools the Creator has made available to us…” which felt like a decent Reply – not based on feeling threatened – and fully acknowledging that all good things can fairly be said to originate from, and be gifts from G*d our use and appreciation.

composite logo for the concept of coexistance

How can you deny someone whatever methods they’ve found to experience and share Love (or Life force)? I respect the right of every Religion to use whatever means they believe in, to get to Heaven…but tromping on others (or their beliefs) does not seem like a reasonable (or fair) part of that road map.

In an ideal world, we should live and let live. Metaphysically oriented New Agers do sometimes use methods of escape to inform their experience of day to day living. But to the last, I would argue, their first hope is to better off their own reality and by some process, to also improve others’. Paganism attracts people who feel we got it wrong – as a civilization – once we latched on to the monotheistic religions…and that earlier cultures had something worth preserving, not denying.

Wicca, the Feminine, and the Elements

Wicca has kept certain traditions alive, and there are innumerable other sects and devotions (not to mention the other major world religions: non-deistic Buddhism and polytheistic Hinduism) that explore Spirit without denigrating other beliefs – that acknowledge the natural as sacred (native religions, and animism) – and aren’t afraid to have the human coexist with the holy…or the profane frolic with the priestly.

My point – in closing – is twofold. First, that crystals – and we who enjoy them – in no way put down the religious. There’s no reason the other way ’round should be happening. And I fully recognize that reason often has no part to play for “the righteous.” But in a world where there is inescapable (and glorious) diversity, peace and civility demand a certain measure of it.

If applying the Golden Rule has any merit, then please do not do unto others as you would not have them to unto you. I, myself, am G*d-fearing (and loving!). I don’t see a conflict. Crystals in no way threaten the greatness or majesty of The Father, Mother, or whatever named or nameless entity you want to ascribe dominion of our reality to. To the contrary, I think they demonstrate the ingenuity and wonder of the universe’s tremendously innovative, and creative power.

Secondly, in my post, I said nothing about healing. Though I could have, and perhaps will be doing so more often. On average, a tiny minority of my posts make any claims regarding the curative qualities of crystals. Not to say that they don’t have them – but I object to the ubiquitous literature making broad and sweeping prescriptions about what this and that stone will “do” or “is good for.”

My beef with much of the prevailing crystal lore is a topic for other writings, but my take home (or share-with-you) message from all of the above, is put the power back into yourself, let there be accessible forces in our midst. Don’t give up your own capacity for mastery – and perception of how things work – entirely to one set of religious dogmas.

Empowerment is the key to personal and planetary healing. Indeed there is scriptural basis to believe that since the expulsion from Eden, the human journey G*d has set for us is one of Choice, and not slavish obedience to some destiny – more often set up by selfish earthlings – than by angels.

We all need to lend a hand in getting G*d’s work done. Whether we are atheistic or not, we should be open to, and embracing, of all the tools given to us to manifest Spirit. I, for one, am “sold” on the utility of crystals in this mission. 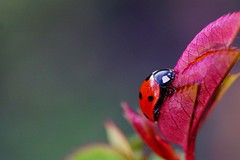